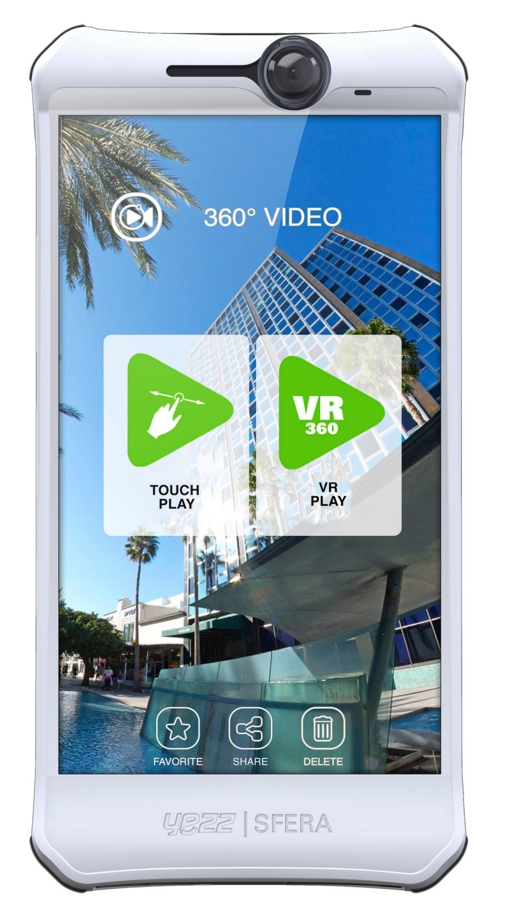 The CES 2016 event hosted announcement of the Yezz Sfera, one of the most special mobile devices released so far. Yezz Sfera is different concept-design of a camera phone. It comes sporting a unique design, but the real thing that makes it special and different from other phones is that its camera lets you shoot photos and videos at 360 degrees (the same feature found in the action cameras). The Yezz Sfera is the world’s first smartphone featuring action camera, or better cameras because its both cameras are 5MP units with the same spherical capturing feature.

This phone is the first handset that brings the virtual reality onto a mobile device when having this smartphone there is plenty of things you can do when taking photos or videos or when browsing your gallery. The phone lets you split the screen to let you see the capture on both of the cameras, preview the entire 360-degree landscape in one window, or pick up any part of the photo to set it up as the photo’s center.

The preview of photos and videos is made via the Touch Play feature. This feature lets you manually zoom images or videos by browsing vertically and horizontally on the by your fingers. If manual browsing is not mind-blowing for you, its VR Play (Virtual Reality Play) viewer will provide you with exactly what you want.

Beyond the dual 5MP, 360 degrees HD Fish Eye camera the Sfera phone comes with good specs. It sports a 5.5-inch IPS HD screen with tempered scratch resistant glass and runs on the MediaTek Helio P10 MT6755 processor with eight Cortex-A53 CPU cores clocked at 2.0GHz and backed 3GB of RAM, 32GB of expandable storage (microSD card support up to 64GB), and it will start shipping by April 30th of this year running on the Android Marshmallow 6.0.

The connectivity supports are highlighted by the support of the 4G LTE connectivity, 3G network, Wi-Fi, Bluetooth 4.0, GPS, Glonass, and a package of sensors like accelerometer, gyroscope, compass, and light.