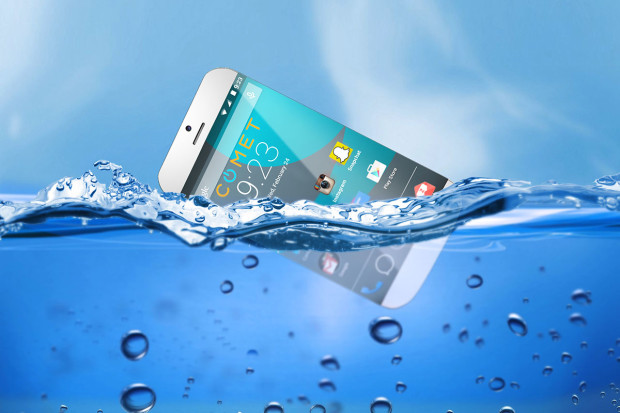 If you find the foldable phones mind-blowing then you’ll certainly be impressed by this complete unique phone design. The startup company Comet Core has brought a brand new high-end smartphone capable of overtaking some of the world’s most popular and advanced mobile devices. This phone comes branded with style as Comet and it is the world’s first smartphone able to swim.

This phone that can swim shames any waterproof device because it comes with no limitations of being in contact with water and it houses technical specifications comparable to the latest iPhone 6S, Samsung Galaxy S6 or HTC One M9. The world’s first buoyant smartphone Comet is the real deal.

The device comes powered by the 2.0GHZ Octa-Core Qualcomm Snapdragon 810 processor with 4GB of RAM and variable internal storage of 32/64/128 GB. To highlight its specs, the Comet will ship starting by this upcoming April running on the Android 6.0 Marshmallow operating system.

But cameras, processor, OS and internal memory is not everything Comet is about. Its connectivity supports consist of the 4G LTE support, Wi-Fi, Bluetooth and more. The most popular featured sensors are the magnetometer, proximity, accelerometer, ambient light sensor, gyroscope, barometer and temperature sensor.

Even though Comet’s manufacturers built it with advanced technical specs, the field where they attend to take over their competitors is the provided security. Comet is a dust-proof and IPX7 + Buoyant -certified device. Besides physical protection, Comet comes with the Q-Lock security software that uses military encryption to prevent your Comet phone from being spied.

Comet’s battery is a non-removable 2,800 mAh unit and the phone’s weight measures only 120 grams.

The buoyant smartphone is being crowd-funded by Comet Core on the crowdfunding site Indiegogo, the same place where the device is available to pre-order. The 32GB of memory model is available for ($385), the 64GB or memory model for $430 and the 128GB of storage model costs only $ ($500). This pricing consists the shipping fees, no extras will be paid by backers in order to put hands on the phone.

Comet sells unlocked and ready to support any carrier. If we convert its specs, features and pricing we’ll realize that this is really a cheap phone.

Comet is an affordable, advanced and the world’s first smartphone that knows how to swim.

If you want to know more about Comet check on the embedded prototype advertorials below.