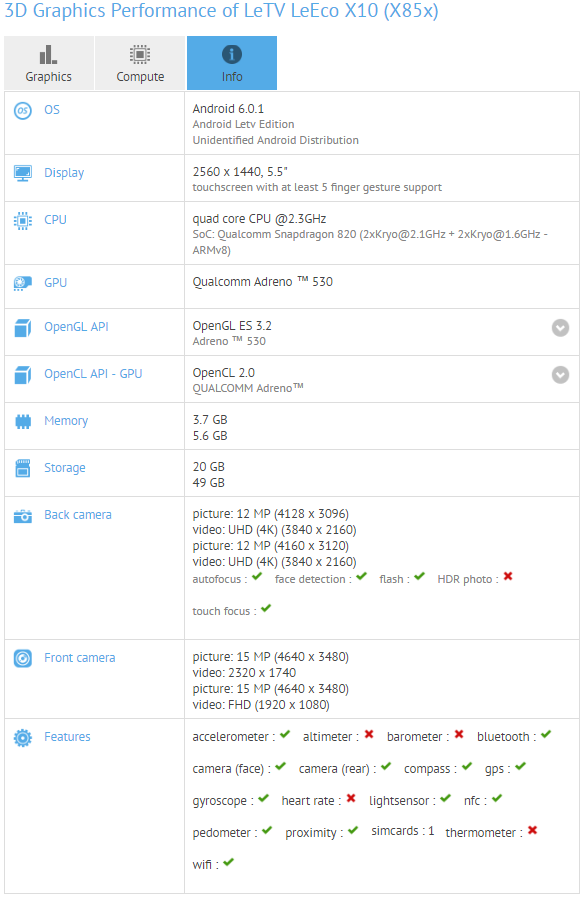 A mysterious LeTV LeEco phone recently made its appearance on the benchmarking site, GFXBench. The feature mobile phone is branded as the LeTV LeEco X10 (X85x), and it appears running Snapdragon 820 processor with up to 6GB of RAM and an outstanding feature barely seen on any current mobile phone. A mind-boggling camera setup of two 13MP cameras on the rear and two 16MP cameras on the front. This device might as well be the best camera phone we will see in the near future

The LeTV LeEco X10 results of sporting a 5.5-inch of a Quad-HD display featuring a resolution of 2560 x 1440 pixels. It might be the smaller version of the formerly reported LeEco X850 which appeared last year on TENAA with Snapdragon 821 and two 13MP cameras on the rear and a 16MP selfie camera. As the LeEco X10 bears X85x branding where the latter X is an unknown series number. However, the handset might actually be the LeEco Le X850 its self and the manufacturer might have abandoned the idea of a 5.7-inch size. However, there are more chances of it being just the smaller version of the upcoming flagship.

LeEco X10 will be running Snapdragon 820 with 4GB and 6GB of RAM with 32GB and 64GB of respective internal storage and be upgraded to Android 6.0.1 operating system.