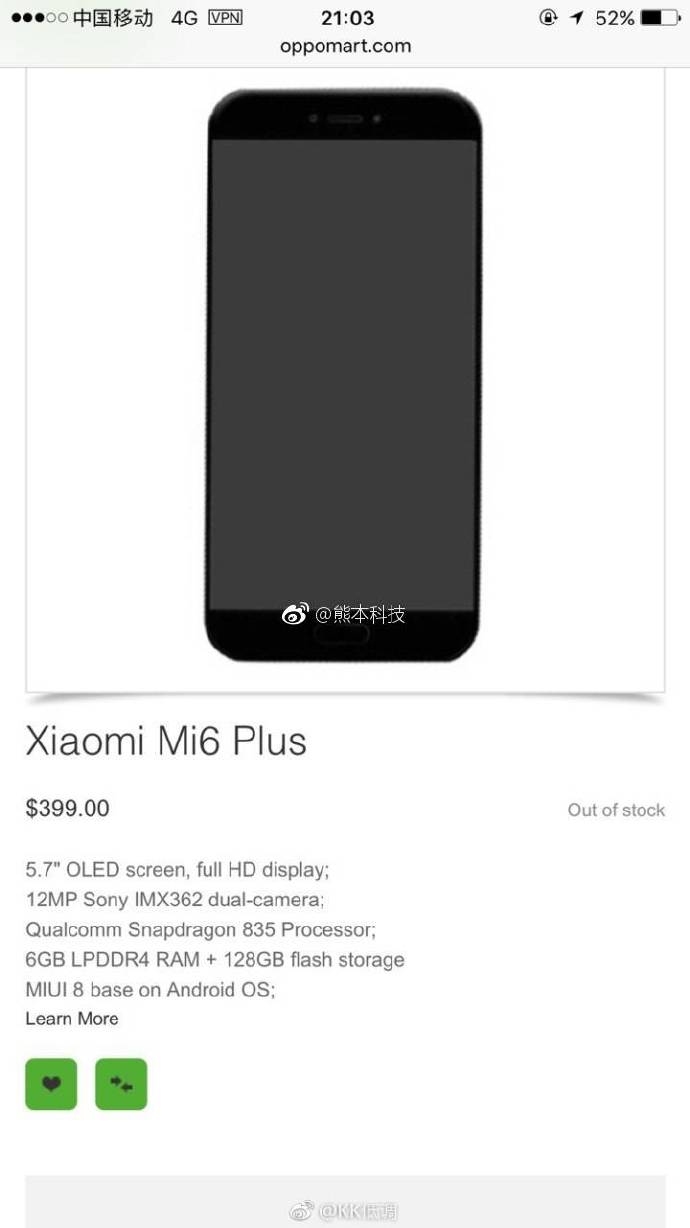 Update: Leaks have come to the end and we now know what top Chinese phone packs within. Read out about Xiaomi Mi 6 release, specs, price, and availability.

The Chinese microblogging platform Weibo has been used again to spread rumors regarding upcoming Xiaomi Mi 6 flagship smartphone that is expected to have its announcement on April 11. This time, the leak consists of spreadsheets that claim to contain full specifications of both versions of the Xiaomi Mi 6.

Spreadsheets are kinda confusing, according to them, Sony IMX400 Exmor sensor will be sported by 5.15-inch Xiaomi Mi 6 and not the larger edition of 5.5-inch, Xiaomi Mi 6 Plus. The Mi 6 lists as an exceptional camera phone that sports a 5.15-inch FHD display with 1920 x 1080 pixel resolution and features the 19MP Sony IMX400 camera on the rear.

If this claim will result in being true, Xiaomi’s flagship will be launching packing Sony’s best camera for mobile phones. The IMX400 Exmor camera sensor for mobile phones was released by Sony with the Xperia XZ Premium flagship during MWC 2017 flagship a month ago.

The specs go on with the listing of the Qualcomm Snapdragon 835 chipset with 4GB and 6GB of RAM and topped by MIUI 8 based on Android 6.0 Marshmallow. This looks suspicious, as the Mi 6 Plus is listed with Android 7.0 Nougat. The storage versions of the Xiaomi Mi 6 are said to come with 32GB, 64GB, and 128GB. Expandable storage is not supported.

Xiaomi Mi 6 smartphone is featured with dual-SIM support and running a 3,200 mAh battery.

Xiaomi Mi 6 Plus was all the way rumored to be sporting a 5.5-inch screen, but the latest leak talks about a larger display panel coming with the phone. It appears to be succeeding the Xiaomi Mi 5s Plus and feature a 5.7-inch FHD display with 1920 x 1080 pixel resolution. Unfortunately, no QHD screen.

It also lists running Qualcomm Snapdragon 835 SoC with 6GB of RAM and storage versions varying by 64GB and 128GB. The operating system is MIUI 8 based on Android Nougat.

According to this report, Xiaomi Mi 6 Plus phone will be featuring the same dual-camera equipment as those featured on the Asus ZenFone 3 Zoom. Two 12MP Sony IMX362 cameras with f/1.7 aperture lens, 4-axis optical image stabilization, phase detection autofocus, HDR, and LED flash for 4K video recording. Selfie camera is again an 8MP Ultrapixel unit while the battery is a 4,500 mAh.