If you’re looking to put your hands on the best smartwatch and you have a budget that disagrees with you, or you simply don’t want to invest a whole lot of money on a watch, there are a lot of options out there that won’t cost you a fortune. When looking to pick a decent watch that you can grab without having to break the bank, you’ll be looking at watches ranging from sub $100 to $150.

Smartwatches ranging from around $100 to $150 are the cheapest options you can take that are worth wearing. Now, if you head over to Amazon and search for cheap watches, you will be introduced to a vast host of ridiculously cheap units. There are smartwatches for as low as $15. The problem with them is that they’re nothing more than digital time telling clocks and almost every “smart” feature of theirs is entirely useless. Their most advanced feature is to vibrate and sound an alarm every two hours to remind you to drink water. As if anyone needs a reminder for that.

Budget-friendly smartwatches listed below will bless you with almost every benefit people living with an Apple Watch 3, Samsung Gear S3, or Fitbit Ionic have, and you’ll be compromising on little things such as a lower display resolution, less fancy design (not always), and some limitations regarding connectivity and activity tracking.

These are the watches that will cost you little, and that will pack all the necessary hardware and software that turns them into smart wearable devices. They’ll be having GPS to help you get around and maintain fitness data, monitor your heart rate and utilize it to improve activity reports, and will be compatible with iOS and Android smartphones. 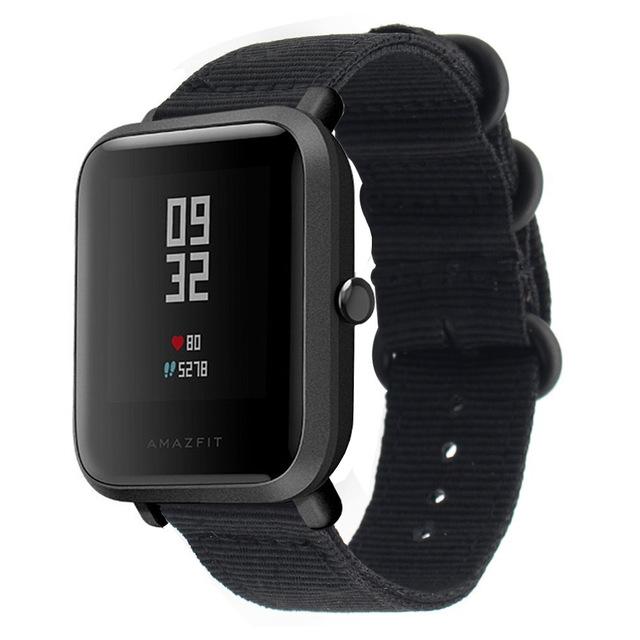 Amazfit Bip is the ultimate smartwatch for a low budget. Provided by Xiaomi’s subsidiary Huami, a well-known company that makes budget smartwatches with compelling features and that we come to know as Amazfit smartwatches. The Bip equips all the sensors a watch needs to become smart, and it has an extensively long battery life, a single charge will keep it going for an entire month. This kind of battery life is what you would expect to have in premium hybrid watches not in a timepiece with GPS and heart rate monitor.

The Amazfit Bip smartwatch is built with extremely light materials. It feels comfortable to wear and weighs only 31 grams. You’ll not even feel it on the wrist. It sports a 1.28-inch touchscreen panel with the always-on display function, has a built-in GPS sensor for route and location tracking, a 3-axis accelerometer, a heart rate sensor, and a barometer to detect altitude.

With the whole pack of featured sensors, the Bip smartwatch makes an excellent and cheap running smartwatch. It also connects to Android and iOS devices to deliver timely notifications, social media updates, phone calls and more. It certainly is the cheapest $100 smartwatch, when considering the whole set of features and sensors, putting your hands on this wristwear for that low is a steal. 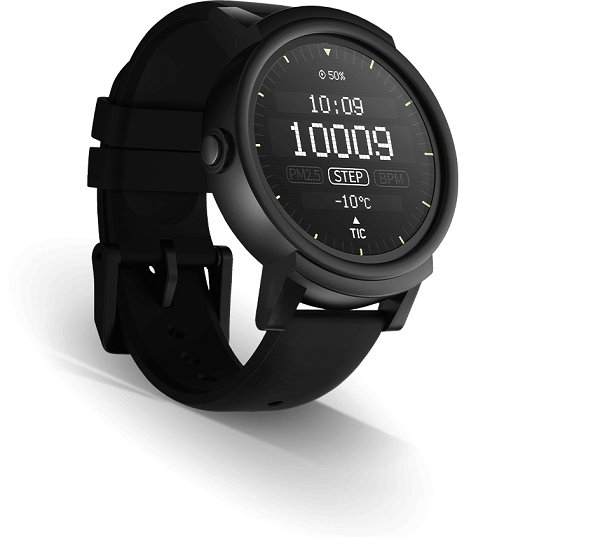 Mobvoi’s Ticwatch E is beyond any doubt the best looking, and feature-rich affordable smartwatch and the new king of budget Android Wear smartwatches. The Ticwatch E Ice (white) and Ticwatch E Lemon (yellow) sports gemstones on all of their four lugs. The classic and elegant design making them appear similar to a traditional Swatch turns these two versions of Ticwatch E into excellent smartwatch options for women. Men get to have a dark edition of this wristwear all for themselves.

The Ticwatch E has its casing made out of top-grade polycarbonate material, a light-weight but extremely durable material. Despite being a low-price smartwatch, the Ticwatch E features GPS and Glonass signaling, heart rate sensor, accelerometer, gyroscope, and compass. You can track every type of physical activity via it and also view mapped routes of your workout routines, distance, speed, and calorie burn.

What makes this wearable even greater is that it runs on Wear OS. You have infinite options for apps and games to download on the watch. It is also compatible with iOS and Android smartphones and has Google Assistant pre-loaded in its system. What else could you ask from a watch that costs only $160? 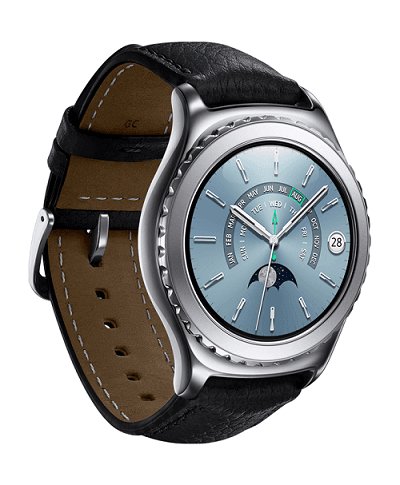 If you happen to love Samsung devices but don’t find it appropriate to spend $350 on the mind-boggling Samsung Galaxy Watch, one of the best smartwatches with 4G LTE support and superior features and design the market currently has in offer, there’s a cheap Samsung smartwatch just for you. Part of the now-abandoned, Gear line of Samsung wearable device, the Gear S2 makes the perfect blending of Samsung superiority in the manufacturing of electronics and an affordable price. Available for just $155, it is as cheap as a Samsung watch can get.

Despite being a little ancient, it remains to be one of the best budget watches for Android. It connects to iOS devices too, although you might encounter some tiny limitations regarding feature functionalities.

The Samsung Gear S2 comes in two versions, a standard version sporting a utterly round design and a second Classic edition that is also round but there’s a rugged outlook on the bezels. The bezel can be rotated and helps big with navigation. This timepiece has GPS and shows your activity and heartbeat on your favorite fitness application for mobile, S Health. The Tizen OS powering this device makes operating with it a fun time. It has a decent battery life and there’s even a cellular Gear S2 version that runs the 3G network. 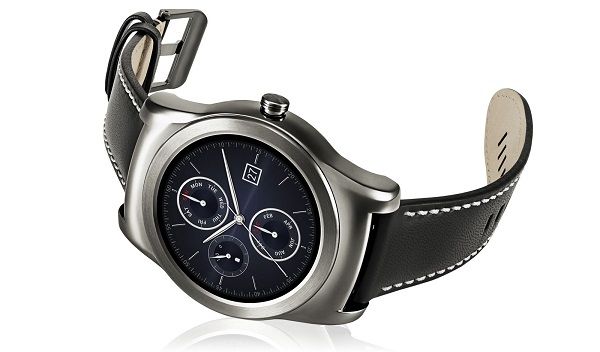 When LG released the Watch Urbane back in 2015, it was one of the most superior wearable devices to had hit the market. Although a little old, it still packs the features that to be relevant to date. The superior metallic design where the classic appearance merges with smart functionalities provided by Android Wear.

The LG Watch Urbane features a vivid full-round OLED touchscreen panel, wirelessly connects to your phone via the cloud to deliver notifications and social media alerts, has GPS and heart rate sensor, takes voice commands and runs Android Wear 2.0. It has everything you need in a wristwear smartpiece, monitors your fitness, helps you with on-map navigations, and there’s even a standalone edition of it with SIM card support. 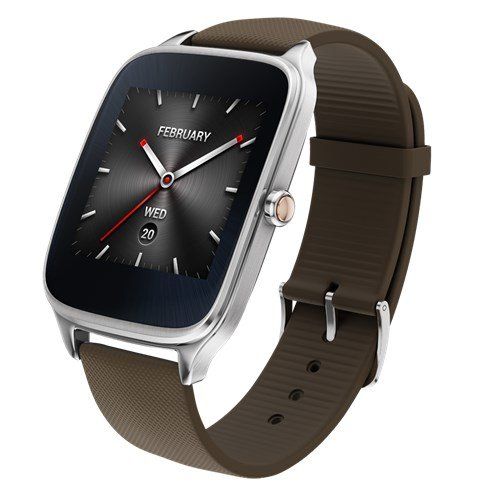 Asus ZenWatch 2 does not have the round design found on the ZenWatch 3 and it lacks the GPS and heart rate sensor that is to be found on other low-budget watches on this list, but it still deserves your attention. It has an elegant and fashionable design to look great on the wrist and can still count the steps. It doesn’t really have that many smart features embedded in it, when it was released, back in 2014, smart watches were pretty basic. It runs Google’s Android Wear OS and comes pre-loading company’s own virtual assistant. It can connect to your Android phone to show notifications and ring alerts and allows you to customize its appearance from your phone via the FaceDesigner app. 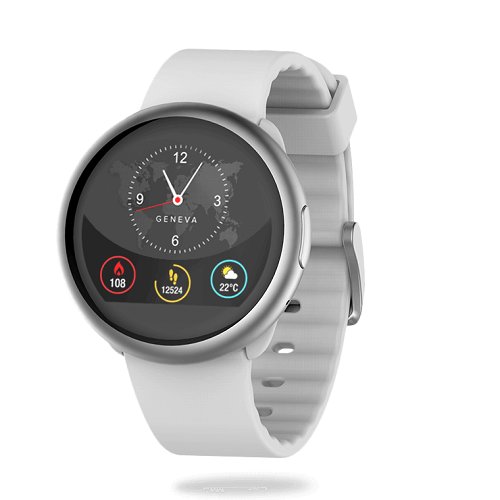 MyKronoz, might not be the top-famous designer of smartwatches but the European-based company has a quite decent collection of cheap smartwatches for iPhone and Android devices. Company’s current best design is the ZeRound 2 HR, a round and beautiful watch with some feature limitations but it has a heart rate sensor to make it stand out,

The MyKronoz watch monitors activity and sleep, allows setting of custom fitness goals, has a built-in app to show weather forecasts, displays alerts and notifications from your phone and can remotely control and play music loaded on your smartphone’s storage. 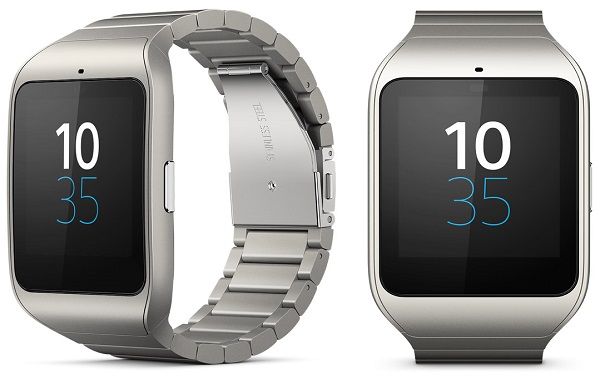 Sony Smartwatch 3 was one of the most successful Wear smartwatches of the time when was released back in 2014. It’s such a sin that Sony didn’t bring newer generations of it. Despite that, it still is a bargain for $131 considering that it packs features to keep it relevant four years after the first introduction.

The Sony Smartwatch 3 is primarily a fitness watch where Android Wear and Endomodo combine their strength for accurate activity tracking and exercise planning. It has a function called Lifelog that records all of your activities throughout the day for you to look upon at the evening, from places you visited, how far you walked, to the photos you took and whom did you call or text. The Sony Watch has a GPS of its own, and it can also make contactless Google payments for you. Not many watches of this price range can do all of these. 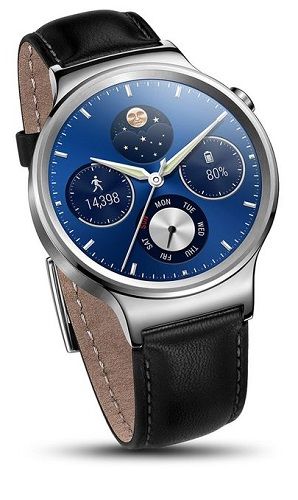 Both of the two generations of the Huawei Watch sport an elegant and good-looking classic design with metallic bezels and leather straps. The first generation of Huawei Watch was one of the very first Android Wear smartwatches to work with iPhone as well.

Unfortunately, there’s no GPS but there is an HR sensor, and it can count steps and displays phone notifications. It also lets you download as many applications for Wear watches as you want on its four gigs of flash memory. When connected to a smartphone it receives data from the GPS sensor on the phone to deliver on-map GPS navigation data. It might be a bit old in technical features, but without a doubt, it is worth investing $150 for the superior design.